What Is A Backspin Paintball Barrel?

What Is A Backspin Paintball Barrel?

The #1 question people ask when they are looking for an upgrade is “What paintball barrel shoots the farthest?” or “How do I make my paintball gun shoot farther?” The simplest answer, and one that people like to refute with total disregard to physics, is that all paintball markers shoot the same range and the same trajectory with a given paintball weight at a given velocity. Lots of little variations may make it seem like a particular marker or barrel is shooting further or flatter, but only a barrel that imparts backspin on the paintball will make it shoot further or flatter.

The reason for this is called the Magnus Effect. To cut a long physics lesson short, by imparting backspin on the paintball you are decreasing the air pressure over the top of the paintball, giving it the characteristics of an airplane wing. The result is a paintball shot with a flatter trajectory and increased effective range, often up to 75 yards depending on conditions!

There are currently two barrel systems on the market that apply a backspin to the paintball: the Tippmann Flatline Barrel System and the Empire Battle Tested Apex Barrel System.

The Tippmann Flatline Barrel was originally released for the Tippmann 98 Custom in 2000 and quickly became a player favorite. How does the Tippmann Flatline Barrel work? The Flatline utilizes a curved barrel with a large inner diameter bore and a rough surface. When fired, the paintball moves forward from the breech, makes contact with the inside curve of the barrel, and rolls along the upper surface. It exits the muzzle with a backspin imparted upon it from the rolling action. 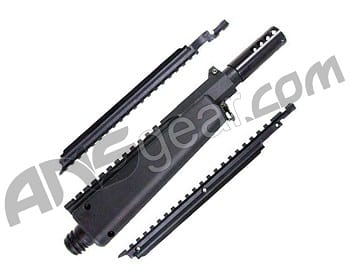 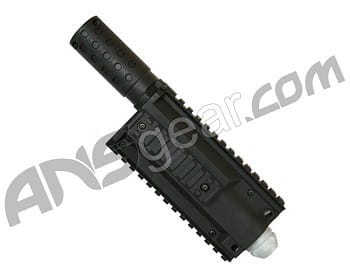 The original Flatline Barrel for the Tippmann 98 involved an adapter, the barrel, and a long plastic shroud that was tricky to install. The latest 98 Custom Platinum Flatline Barrel fits all older as well as newer 98s and simply screws into place, similar to the A5 Flatline, X7 Flatline, and X7 Phenom Flatline models. When shooting the Flatline barrel the ball dramatically drops first and then lifts back onto its original trajectory.

The original BT Apex Barrel was released in 2005. The Apex Barrel used a standard straight barrel with a large plastic shroud on the end for a 14 inch total length. Inside this shroud was a curved rubber ramp and a slide adjuster to alter the position of the ramp. The entire shroud can be rotated 360 degrees. In 2011, the BT Apex 2 Barrel was released, featuring an improved ramp design, narrower and longer shroud, and available in 14 or 18 inch lengths. 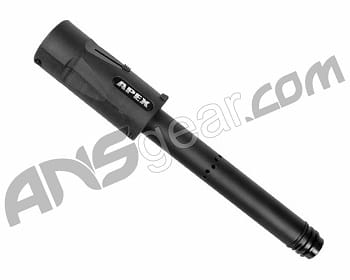 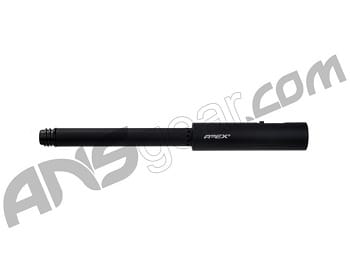 How does the Apex Barrel work? With the slide adjuster all the way back, the ramp is raised and the Apex functions as a normal paintball barrel. As you slide the adjuster forward, the rubber ramp lowers in front of the bore, making contact with the paintball. The more it is lowered, the more backspin speed is increased on the paintball. Thus, you can adjust the range and trajectory of the ball to find the combination of range vs. accuracy. The shroud can also be rotated to change the axis of spin on the paintball, making your shots curve left, right or drop down suddenly. It takes much practice to master these techniques.

Which is better, Flatline or Apex Barrel? Both have their advantages and disadvantages. The Flatline is not adjustable to find a “sweet spot” like the Apex, but it also does not get knocked out of alignment or require any manipulation on the field. The Apex Barrel is lighter weight but distracting when trying to reset it on the field. Regardless of which you choose, it is highly recommended to use fresh, premium quality paintballs. Irregular and out of round paint will cause a paintball with backspin to fly erratically, reducing your accuracy and consistency.